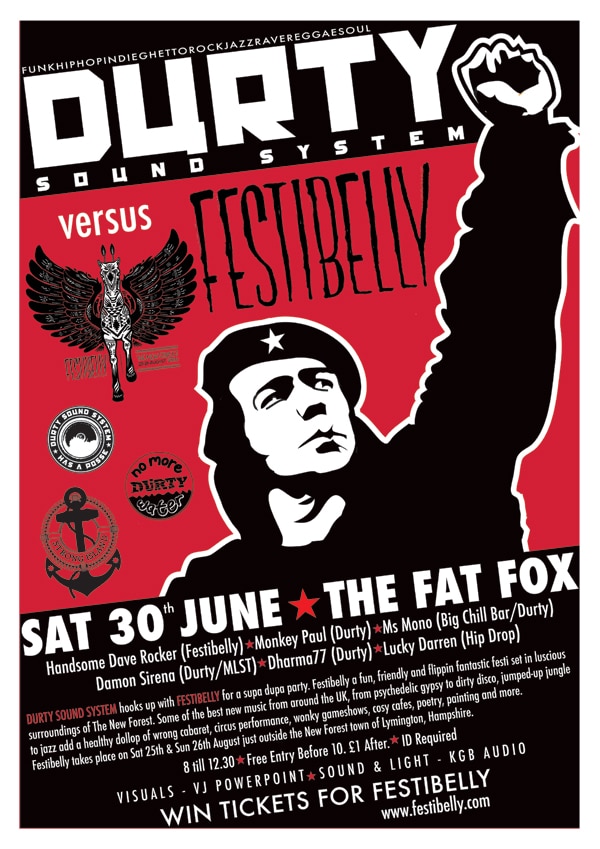 Durty Sound System are putting on an event with Festibelly, where you can win tickets to this fun, friendly and flippin fantastic festi set in the luscious surroundings of The New Forest. We pick some of the best new music from around the UK, from psychedelic gypsy to dirty disco, jumped-up jungle to jazz (and everything in between), add a healthy dollop of wrong cabaret, circus performance, wonky gameshows, cosy cafes, poetry, painting and more.

Buy buying a raffle ticket not only have you a chance of winning, but also making a difference to peoples lives without clean water and sanitation. 100% of the raffle ticket money goes to No More Durty Water.

A transformation of the Fat Fox by the Durty Sound System decor team, with added visual entertainment from Vj_Powerpoint.

And yes will be bringing in a kicking sound system, along with lights, provided for by KGB Audio.

Add to this some backing from Strong Island, and you know this is going to be one hell of a party on the Southsea summer season.