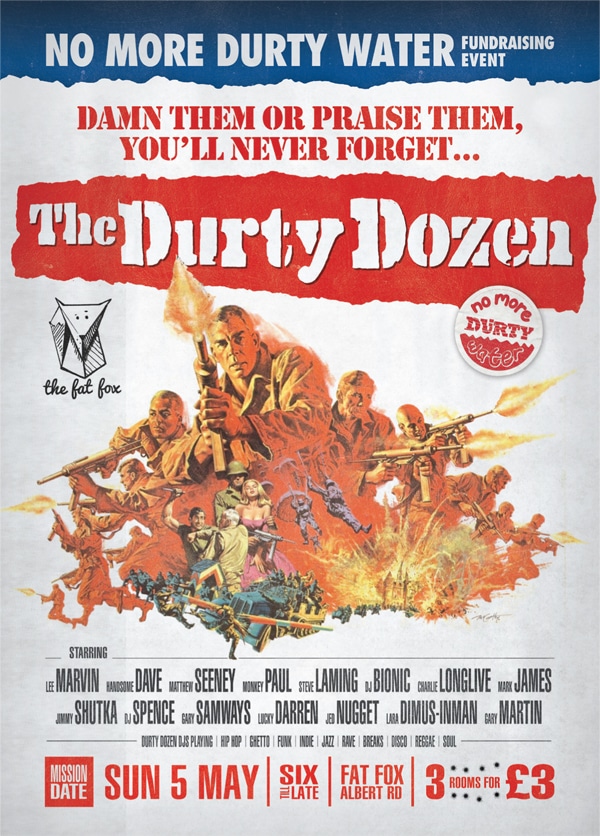 Our friends from Durty Sound System are putting together another FUNDRAISER for us.

With the money raised from this event, and another in Brighton, will allow us to work with Calcutta Rescue in Kolkata
Calcutta Rescue has moved into the field of arsenic mitigation in response to the current crisis whereby, as a result of a drop in the water table, the drinking water supply for millions of people in West Bengal has become contaminated with arsenic, a naturally-occurring and very toxic substance.
We are hoping to buy a water filtration unit, which filters out the arsenic and supplies clean drinking water.

A themed party based on the Robert Aldrich 1967 classic war film The Dirty Dozen.

The Durty Dozen, the most twisted, anti-establishment bunch of music junkies your ever run into!

We have trained them, excited them and armed them with fantastic records to execute their mission.

Yes Yes Y’all we are taking over all over the Fat Fox, and the Atrium upstairs for a party you’ll never forget.

The Durty Dozen will be fitted out in US Army WW2 outfits.

If you want to join with the fancy dress. The theme is Britain in WW2. No Nazi’s Welcome!!

Full D.S.S Decor, lighting and Sound. Plus we will be installing the Latest Durty Sound System in one of the rooms…BOOM!

The party kicks off at 6pm till late.
Plus as its a bank holiday weekend, no school the next day.

Tickets are a recession busting £3.

This event is not about glorification of war. Just the first of many theme nights to add to the fun.

War, Politics, Pollution and the Banking System are directly contributing to this horrific situation.

This event is dedicated to the people who have lost their lives fighting in wars and revolutions.

The Dirty Dozen was also one of the first movies to show the darker side of war – that the best soldiers are often society’s outcasts, the sociopaths and misanthropes who kill and rape. War is not civilized, and there’s no place for order or manners amidst the carnage of a battlefield.

About a suicide mission, the army has decided to use 12 criminals who are either awaiting the execution of a death sentence or who have been condemned to spend at least 20 years in prison. If the “volunteers” survive and distinguish themselves, their sentences will be commuted.