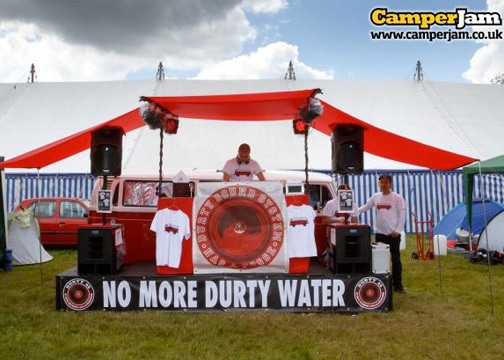 The Durty 45 Bus had an amazing first year, going down a storm at CamperJam, Beach Buggin’, Amakuru Vdub and Southsea Bandstand.
The engine has been rebuilt, so the Bus is ready for promoting for No More Durty Water in Summer 2012.

As you can see from the photographs, there was a few changes along the way. The stage had to go, as needed another bus to get it there, which is not very environmental. A professional tent was purchased to go over the whole thing, making Durty 45 Bus fully weather proof and safe.

Everyone involved with the Durty 45 Bus, works for free, and even pays for the fuel. There is no cost to the festivals, unless they would like to make a donation to No More Durty Water.

If your interested in the Durty 45 Bus attending your event visit Durty 45 page or email paul@nomoredurtywater.org.